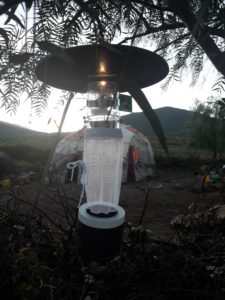 By impeding livestock productivity and international trade of live animals and animal products, such diseases can have a large impact on the economy. For instance, trade restriction due to the 2006/2007 RVF outbreak in East Africa has caused 36% GDP loss in the Somali Regional State of Ethiopia. Distribution and burden of vector-borne diseases are determined by a complex dynamic of biotic and abiotic factors, which, together, affect vector-borne disease transmission.

Following a one health approach, the project is aiming to identify biotic and abiotic factors associated with RVF and WNV occurrence; assess the species, abundance and environmental preference of the major vectors; and assess identification and molecular characterisation of RVF virus and WN virus from vectors. The study will be conducted in two major sites in southern (Borena zone) and south eastern pastoral and agro-pastoral areas (Somali region) of Ethiopia. 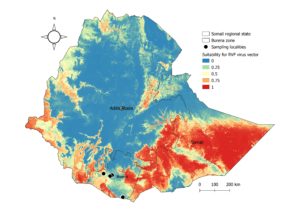 This one health project aims to:

The project will help to understand vector borne diseases transmission and help control efforts; hereby enhance livestock productivity, and alleviating poverty, hunger and food insecurity of the pastoralist and agro-pastoralists.