On 16th May 2019, Samuel Tefera (Assistant Professor & HORN Project One Health Fellow) and Samuel Lumborg (HORN Project and LSTM MSc Student) travelled to the South Omo zone in Southwestern Ethiopia. The purpose of the trip was to carry out qualitative research about the influence of climate change on the health of Hamer pastoralists and their livestock. 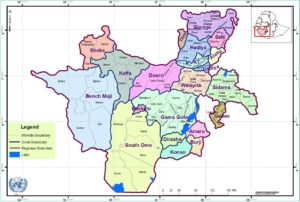 Situated in the Southern Nations, Nationalities and Peoples Region of Ethiopia (SNNPR), the South Omo zone is comprised of eight woredas. The Hamer woreda is approximately 700 km south west of Addis Ababa and borders Kenya to the south.

The research team flew from Addis to Jinka, which is the zonal administrative centre for South Omo. Here we met up with Tibebu, a driver who had driven down from Addis to provide transport for the duration of the study.The team spent a couple of days in Jinka processing a letter of acceptance from the zonal government allowing us to undertake the research, and we also took the time to speak to ministers of health, pastoralism and agriculture to gain current local understandings of the situation in the Hamer woreda. The Hamer woreda is approximately a two hour drive from Jinka. There are two main towns in the woreda: Dimeka and Turmi. We were based in the latter. 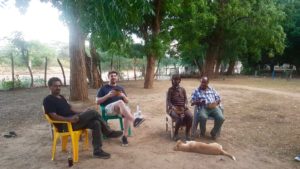 The Hamer people, the demographic majority in the Hamer woreda, are one of multiple ethnic groups found in the South Omo zone. They practice a combination of pastoral and agro-pastoral agricultural methods relying mainly on livestock to maintain their livelihoods and provide a main source of nutrition for the community; milk and blood are consumed regularly. Cattle, goats and sheep are the main livestock kept by the Hamer, although some communities also rear chickens. The Hamer live in semi-permanent settlements spread vastly across the woreda, with some up to 70 km from the nearest town. Generally, in the dry season the herdsmen will take the majority of the livestock (mainly cattle) to nearby grazing lands. In the rainy season the cattle will be brought back to the settlements as the rains usually bring an abundance of fodder for the cattle to graze on.

Although scattered throughout the woreda, Hamer settlements are organised into administrative kebeles. In total there are 35 kebeles in Hamer woreda. This study included four kebeles: Angude, Kolakeja, Shanko and Sinbele. These kebeles were chosen due to their proximity to the town of Turmi (where we were based), and also due to their topography. Two of the kebeles (Shanko and Sinbele) were highland settlements and two (Angude and Kolakeja) were lowland settlements.

At total of four FGDs were completed, one in each of the four kebeles. The number of participants in the focus group ranged from 5-10 all of which were Hamer pastoralists; men and women.

Results from the data collection will be analysed and discussed further in a MSc Dissertation. Furthermore, the study will provide wider knowledge for the HORN project who will undertake further research on related issues in the South Omo zone.