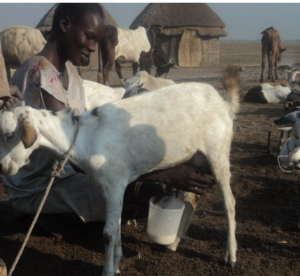 Goats are among the first domesticated hoofed animals which are reared worldwide. Following their domestication, they dispersed throughout the globe through human movement and trade routes. They played an important role in human economic development and are mainly used for the livelihood improvement of low-income populations. They are also used as sources of proteins in the form of meat, milk and dairy products, cash income, cultural and religious values, and manure used as fertilizer mainly in mixed agricultural production systems. In Ethiopia, though goats are one of the important livestock species, the timing of introduction and entry points/dispersal routes of goats in and throughout the country, as well as their evolutionary history is poorly understood and studied. As far as we know, this archaeogenetic study using DNA sequencing will be conducted in Ethiopia for the first time combined with detailed zooarchaeological research.

This ancient DNA study of goats will cover areas from Southern Ethiopia (Yabelo, and Mochena Borago), Central Ethiopia (Nora) and Southern Eritrea (Matara). The latter is a Pre-Aksumite archaeological site and is located eighty kilometres from Asmara, near the common border between Southern Eritrea and the Tigray Regional State in Northern Ethiopia. This zooarchaeological study combined with ancient DNA can shed light on the past interactions between human and animals and bring a temporal dimension to our understanding of modern-day human-goat interactions. It will also be valuable in identifying population origin, migration processes, evolutionary relationships, and genetic diversity of local populations. This aDNA study is also a baseline for the modern genetic study (see below) and will help understand the evolution of traits linked to environmental adaptation and disease resistance. The advancement of molecular techniques, and low cost and fast whole-genome sequencing methods has unlocked unprecedented potential for investigating these questions and obtain a new understanding of the structural and functional consequences of caprine genome evolution.

The wild ancestor of the domestic goat is believed to be the wild bezoar (Capra aegagrus) given that all the mitochondrial DNA haplogroups found in the modern goats are also present in C. aegagrus. Domestication and subsequent natural and artificial selection result in an extensive change in behavioural (e.g., reproduction), morphological (e.g., body size, coat colour) and adaptation (e.g., disease resistance) traits, all important to fulfil human needs. As a result, goats now inhabit in different environments and have a great role in improving livelihood of many subsistence farmers. Goats are also considered as a household asset and used as gifts for sons and daughters in the rural areas of Ethiopia after they marry. On top of that, nowadays, goats are used as an animal model for biomedical research, with the purposes of examining the genetic basis of complex traits, and in the transgene production of peptide medicines for treating different diseases. Despite goats having economic, nutritional, and biological importance, breed improvement and genetic studies have been hindered by the lack of reference genomes of local ecotypes throughout the world. This problem is faced mainly in developing countries like Ethiopia. 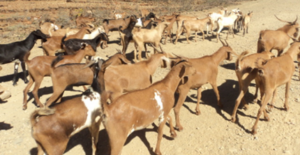 The advancement of molecular genetics allows livestock production improvement and the identification of selection signatures that can provide a direct insight into the mechanism of artificial selection and allow further discovery of the candidate genes related to phenotypic variation. This artificial selection is practiced worldwide to improve production performance of goats and other domestic species focusing on growth rate, meat and milk production, and coat colour preference. Whole genome molecular characterization is also important to identify economically merit traits, breed history, to design breeding programs using marker assisted selection, to get more accurate data and conduct comparative genome analysis with other breeds, the utilization of genetic resources and conservation decisions. However, in Ethiopia, limited research has been conducted in genetic diversity of goats using whole genome sequencing and it makes the full implementation of the above points difficult. The country is also not benefiting from the goat genetic resources even though it has diverse goat ecotypes (more than14) both in phenotypic and genetic characteristics and has a goat population of more than 30 million. Hence, the present study covers modern populations from all over the country and focuses on whole genome sequencing of Ethiopian local goats to investigate their population structure, geographic distribution, and genetic diversity.