Keith is first and foremost an archaeologist, but has always been fascinated by the biology of the past and how that intersects with and impacts human behaviour, health and cultural development. The inherent cross-disciplinary nature of archaeology has allowed him to develop this interest further through the intersection of a range of other disciplines, including genetics and microbiology. 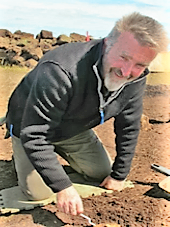 For the last 30 years, Keith has been actively involved in bioarchaeological research in Britain, the Middle East, Central Asia, East Asia, Central America, and Oceania. His ongoing research involves major projects on the domestication and dispersal of pigs and dogs; human colonisation and migration history as seen through commensal rodents; and the evolution of our oral microbiome.

He was one of two project leaders of a CNRS-funded Projet de Groupement De Recherche Européen (GDRE) entitled – BIOARCH- Bioarchaeological Investigations of the Interactions between Holocene Human Societies and their Environments – and was also the Director of a Co-Reach funded Chinese-European research collaboration (EUCH-BIOARCH).