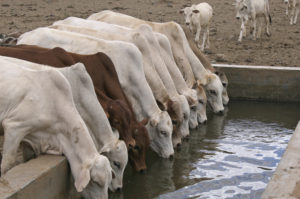 Infectious diseases, including zoonoses, remain a serious challenge for Ethiopia’s agricultural economy and public health. Since their introduction to Ethiopia, cattle have played a central economic role amongst local pastoral communities. They have adapted to the country’s diverse environment and its endemic zoonoses, resulting in local cattle possessing a unique genetic pool of resilient traits. Yet crossbreeding with European stock, impact of pathogens and a lack of identification, characterisation and conservation of the indigenous gene pool is leading to the erosion and loss of resilience. Furthermore, our understanding of the evolutionary history of zoonoses is limited, with past published research having primarily focused on tuberculosis, brucellosis and the plague. Archaeogenetics, or the study of ancient DNA, can address such gaps in knowledge by adding a temporal dimension to ongoing veterinary and epidemiological research, and by offering a direct window into the genetic makeup of past populations.

Through ancient DNA sequencing of thirty archaeological cattle remains originating from four sites across Ethiopia (Matara, Mochena Borago, Nora, Yabello) and spanning the last two thousand years, this research, nestled within a One Health framework, aims to begin mapping the evolution of authentic indigenous traits linked to environmental adaptation, disease resistance and productivity by characterising the past genetic diversity of local Ethiopian cattle populations through time. These genetic analyses will also evaluate the potential of recovering genetic material from ancient pathogens from archaeological material.

This study is the first to assess the feasibility of recovering ancient pathogen genomes in the Horn of Africa, as well as explore resistance to pathogen infection and environmental adaptation through time in local cattle populations in Ethiopia. If high quality genetic material is recovered, our findings will enrich our understanding of the history and biomolecular mechanisms driving zoonotic evolution, potentially contributing key data to the development of modern-day countermeasures. This research also hopes to shine a new light on biological heritage and inform conservation measures, ultimately positively impacting on local cattle biodiversity and breed development programmes today.