The archaeological component of the HORN project kicked off in May with a reconnoitre to Ethiopia by myself and post-doc Dr Ophelie Lebrasseur. We were very fortunate to be accompanied by an Ethiopian colleague and zooarchaeologist from Washington University in St Louis, US – Dr Helina Wolderkiros – who kindly organised meetings for us with prospective collaborators at the National Museum in Addis Ababa, along with the relatively new Archaeology Departments in the Universities of Mekelle and Adigrat in Northern Tigrai.

Our base in Addis Ababa was the lush and green ILRI campus, where we met colleagues to discuss how our ancient DNA ideas might be supported by existing expertise and facilities there. Prof Olivier Hanotte from ILRI is keen that Ophelie bases her research in his laboratory, which will be ideal. 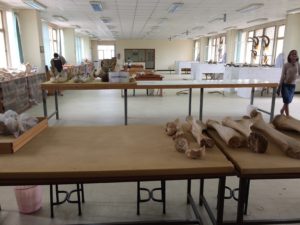 Conversations at the National Museum revolved around possibly supporting the development of their new laboratory for preparing comparative skeletal collections – which they would use to identify the many palaeontological and archaeological assemblages in their stores.

They have some very important collections, especially those relating to early hominid evolution, and we were lucky enough to get to see the original fossil of Lucy – one of the most famous fossils showing the first evidence for bipedalism some 3.2million years ago. 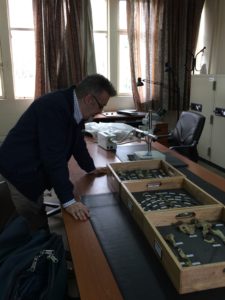 From Addis Ababa, we took an internal flight to Mekelle, where for the next couple of days we worked with colleagues from The National Regional State of Tigrai, Culture and Tourism Bureau and Adigrat University, visiting various rock-shelter sites where rock-art has been found. There are new sites being discovered all the time and the State Bureau are extremely keen to produce a record of them before the images disappear through erosion and vandalism. The sites are amazing – some in inaccessible spots high up on cliff-faces, others in strategic locations overlooking traditional grazing grounds for nomadic pastoralists. 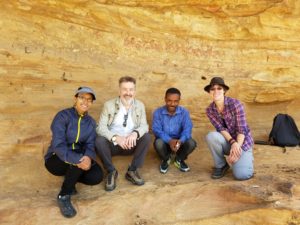 Much of the art depicts anthropomorphic and zoomorphic images – a good few showing domestic cattle (including clear taurine and zebu forms of with different coat colouration, horn shapes, even udders). None have been directly dated and no systematic survey has ever been undertaken of this important but rapidly disappearing resource, so this is something that they are keen for us to help with. 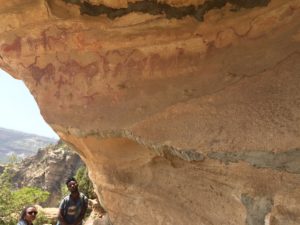 We also identified one of the sites as a likely candidate to base an archaeological field school to train students from the Universities of Adigrat and Mekelle in modern excavation techniques and bioarchaeological recovery and analyses. A quick walking survey showed pottery and lithics scattered in front of the rock shelter and erosion trenches that had been dug showed up to 1.5 m of archaeological deposit, indicating a site that nomadic pastoralists likely used for perhaps 1000s of years. If we could recover animals remain from such an excavation, we could explore, in detail, a range of questions, e.g. the origins of local cattle, sheep and goat breeds, the introduction of zebu cattle, the evolution of zoonotic diseases etc., and potentially link that evidence to the evidence from the rock art. 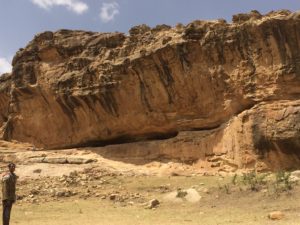 As well as the truly Indiana Jones experience, we had more formal and positive meetings (drinking amazing local coffee) with senior colleagues from both Universities discussing potential capacity building, training and research elements that the HORN project could support. Mekelle and Adigrat are relatively new Universities that have ongoing ambitious expansion plans in buildings, but still with rather basic scientific facilities. 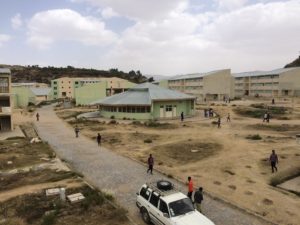 This was my first visit to Ethiopia and I can honestly say it was a fantastic experience. An amazing country, great coffee and food, very welcoming people and awesome archaeological potential. I can’t wait to return and get some of these projects underway.